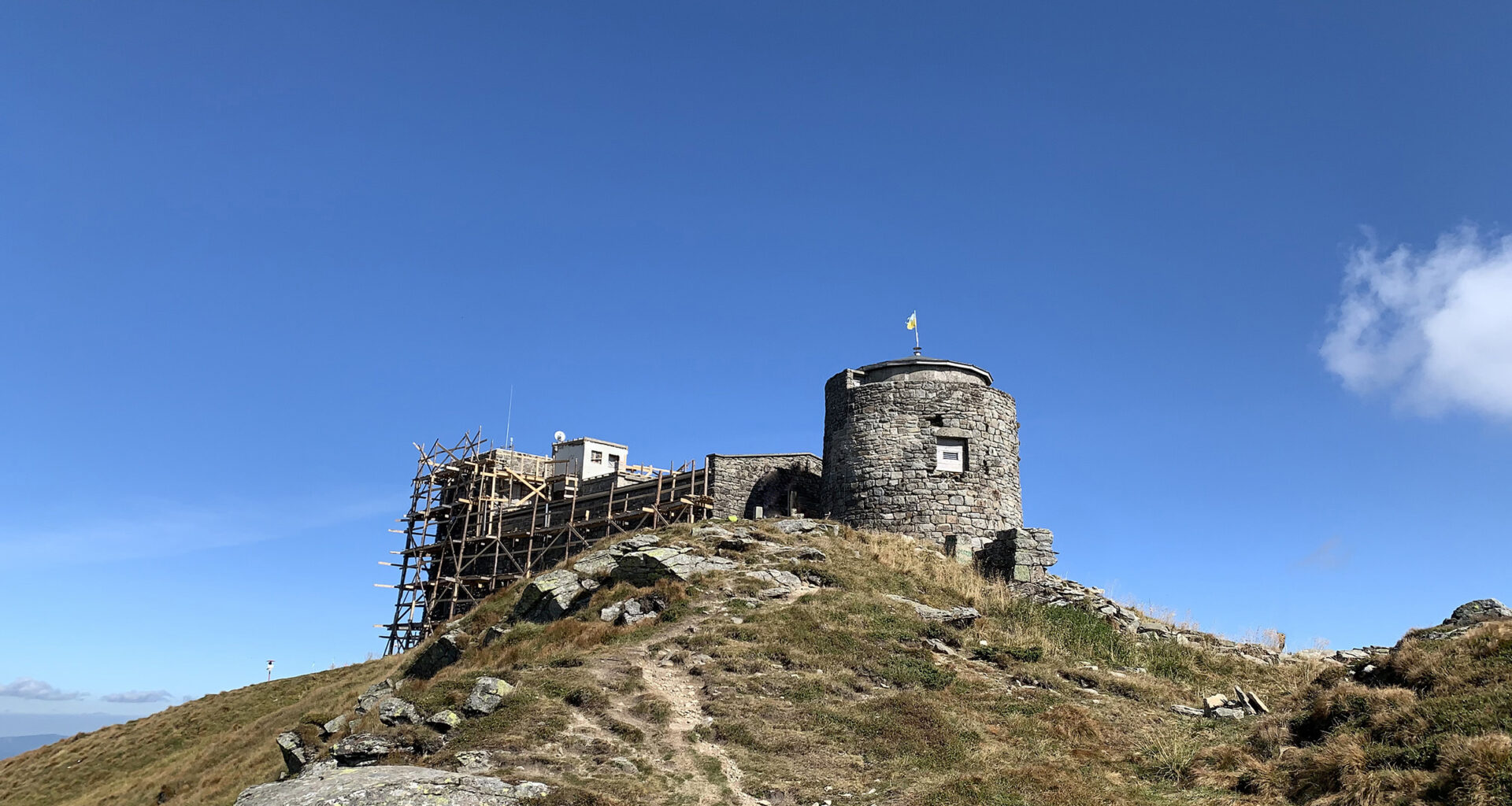 Pop-Ivan Chernogorskiy, Chornaya Gora or Chornohora – attractive by the fact that at the top is the highest building in Ukraine – the famous observatory “White Elephant”. From Popa-Ivan begins the Montenegrin ridge, which consists of all six two-thousanders of Ukraine.

The name of the Pop-Ivan mountain has been fixed since the middle of the 20th century. There are several legends about this. Allegedly, there was a priest Ivan, who on the day of Ivan Kupala led his flock to the mountain for a prayer service. The second name is Black Mountain, which is often confused with Montenegro (the mountain range to which the peak belongs). Why is the mountain “black”? According to legend, the glorious leader of the Carpathian opryshki Oleksa Dovbush killed the devil here. Because of this, all the rocks turned black. But that’s not all. Popa-Ivan is also called “White Elephant”. During the planning and construction of a scientific project, some people did not understand the meaning of such an expensive construction, hence the name “White Elephant” – a dubious benefit for a lot of money. And also because of the external resemblance to a large white beast in winter.

In 1936, the Polish Ministry of Military Forces began construction on Mount Pop Ivan. The project was ambitious. At a height of 2028 meters, workers had to heavily transport stone, wood, special expensive equipment, not only by horses, but also on their own backs. Design engineers have made it possible for staff to stay on the mountain all year round. Plumbing and electricity were installed to the building, and a boiler room was equipped. There are 43 internal rooms in total. It had its own bakery, greenhouses with conditions for growing vegetables.
The main asset was an astrograph, with a 33 cm lens in diameter, which was brought from Scotland. Thanks to him, scientists could study and take photographs of the starry sky. At that time, the Popivan Observatory deservedly ranked second in Europe and sixth in the whole world.

The implementation of an expensive project in such a short timeframe caused doubts among some employees. They could not believe that in the post-war era, the government wanted to invest colossal resources on meteorological observations. One of the versions is that in fact the observatory was built only to cover an underground airfield with a telescopic runway. And somewhere in the mountain there is an engine room hidden, as in winter a cloud of steam constantly rose over one of the slopes. Allegedly, working engines were constantly warming up the mountain there. But, for now, this is just an interesting story, which over time covers all the grandiose construction.
After the outbreak of World War II, the research personnel were urgently evacuated, the equipment to be dismantled was removed. They say that the Hutsuls still cook Poloninsky cheese in the copper dome from the tower.
The powerful walls of the building, up to 1.25 meters thick, have withstood more than 70 years without the slightest repair. The conservation of the premises began in 2012. To this day, restoration work is underway.

How to get there, route

Regular buses to Dzembroni can be reached from Verkhovyna or from the highway from the turn to the village. Iltsy. It will not be difficult to get there by car, you can leave your car in the village, both in a paid and free parking lot.

Three popular routes have been laid on Pop-Ivan: from the Shibene checkpoint across Lake Maricheika, from the village of Dzembronya through Mount Ushasty Kamen or Mount Smotrych and from the grope valley (passage from Marmaros to Chornohora). Or you can complete the passage of the Montenegrin ridge by Pop-Ivan, using one of the above routes to descend. The first route is more suitable for lovers of extreme mountain riding: whether it is a bicycle, motorcycle or jeep. By road you can get to the very top.
Recommended route – from Dzembroni through Smotritsky waterfalls and Ushasty Kamen. Although it is longer than the route through Smotrych, it is simpler and more picturesque, and the Ushasty Kamen mountain itself deserves special attention. Distance about 11 km, ascent time 5 hours, descent – 4 hours.

Smotrytsky waterfalls are located on the slopes of the Smotrych mountain of the same name, at an altitude of 1400-1700 meters above sea level. The highest cascade is 10 meters, and the total height of the waterfalls is about 100 meters. The source is the Munchel stream. The water is icy, so you can cool down here on hot summer days.
To get from Dzembroni to the cascades, you need to follow the path in the direction of Mount Smotrich. Once on the meadow, without turning off the path, you must move to the right. Ahead there will be a forest, and at the exit from it the Dzembron waterfalls are rustling. A walk from the village takes about 2 hours, the distance is 5 kilometers.

Mount Ushasty Kamen is often perceived as part of the route to Pop-Ivan, although you can plan your trip to the Carpathians only for the sake of visiting this natural formation. The Ushasty Kamen adjoins Smotrych Mountain and is easily recognizable among other Carpathian peaks thanks to high stone rocks of various bizarre shapes sticking out of the mountain’s body. The difficult part of the ascent to Pop-Ivan ends on the Ushasty Kamen, it remains only to make the last dash and go to the old stone Popivan observatory.

Where to stay: accommodation, huts, camping

For lovers of a comfortable stay, there are many options for mini-hotels, cottages in the village of Dzembronya. Also, before reaching the village, on the right side, there is a great place for camping: several gazebos, the presence of a barbecue and even a swing.
Another option is to spend the night in a kolyba or near it (above Dzembroni). There is only one kolyba on this route. It was built in the valley, not far from the fork to the Ushasty Kamen and Smotrych. There are two rooms inside. There are two-story sun loungers and a stove. One room can accommodate up to 7 people. In the second one a sunbed and a fireplace. Cheese is brewed here in summer. From the end of May to September, shepherds live in the kolyba, and in autumn or winter tourists can stay here. The house is warm, there is a spring next to it.
Kolyba coordinates: 48.082242, 24.666905

Didn’t have time to climb to the top or were you caught in bad weather? Set up tents under the Eared Stone or closer to the waterfalls – as a rule, there is a windward side, there is access to water, and the juniper around the camp will make the night cozy. Making a fire in these parking lots is questionable, better play it safe and take a gas burner.

Water on the route

Mount Pop Ivan is famous for its strong and gusty winds. In winter, there is a multi-meter layer of snow at the top, and the temperature drops to -40 degrees.

The former observatory on Mount Pop-Ivan has tremendous potential. If not for the sake of science, then for the development of tourism in the Carpathians, it is worth reviving such treasures to life. Placing a shelter or mini-hotel, a cafe with drinks and snacks, all with an incredible view, would attract thousands of travelers from all over the world to the top.

See More
Norway is considered to be a fabulous country with many legends. It attracts tourists with amazing nature, beauty…
See More
See More
In the summer I was invited to visit Bari, Italy. After staying there for a couple of days,…
See More

See More
In the Bukovina Carpathians, there are hidden 5 white domes that ensured control of the USSR air border.…
See More
x

This Site Is Protected By
Shield Security →